Acclaim Home Health is raising the standard of care.
The proof is with our patients. 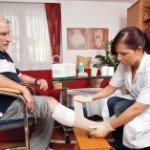 Judy Smith didn’t want to leave her home for a nursing facility. Recently discharged from the hospital after suffering from congestive heart failure, her status was touch and go. Along with her heart problems she also suffered from uncontrolled hypertension. The rapid changes in her blood pressure often made her suddenly dizzy, and at risk of a disabling fall.

Judy was referred to us by a friend. After receiving three months of home care from Acclaim she has fully recovered and is now living a fulfilled life which includes spending time with her new grandson, family and friends.

“I will forever be grateful to Acclaim for helping me recover, they now are considered true friends.”